This page outlines how to estimate the impulse response (IR) of an underwater recording channel, invert it, and adjust source spectral levels (SSL) of an unknown source recorded in the same channel. The published paper can be found here: Source characterization. Matlab code is available upon request.

Here is an introduction to the problem:
The figure below (Figure 1(a)) shows a diagram of the inverse problem in an underwater recording environment. The recording process can be modeled as the convolution of individual IRs. Here, the input signal of the source

is recorded in a reverberant channel g(t) with a hydrophone

. The hydrophone is connected to an analog to digital converter (ADC, denoted by

) and the recorded output signal

is stored on a hard-drive. 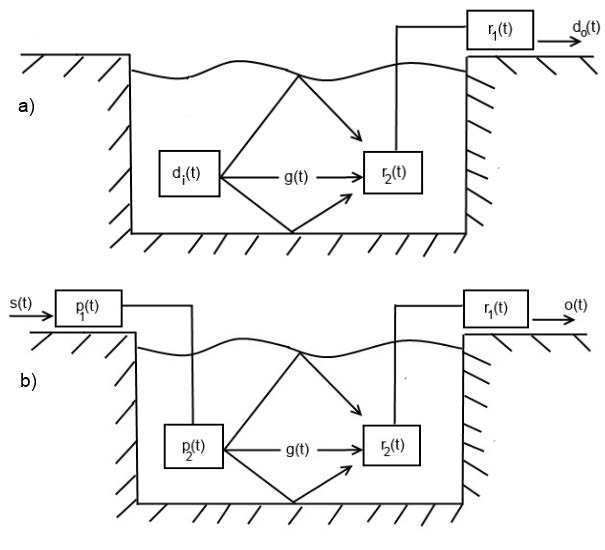 which is connected to a transmitting transducer

. It is assumed that both the unknown source and the transmitting transducer have similar directionality and are of similar shape. The channel and the recording equipment is the same as in the inverse problem and the recorded signal is denoted by o(t). The total IR combining the playback and recording devices with the channel is abbreviated by the filter h(t):

) because (a) of the pressure fluctuations in a reverberant enclosure and (b) the system might not be entirely time invariant. We will however assume that the system is ergodic, which means that that we can take averages in time (successive measurements) to get an average in space (i.e., the pressure distribution). We will also assumed that the system is linear, i.e., that there exists adequate acoustic support for the lowest frequency of interest. In the above equation, the power spectral density of the recorded signal

is known as well as the amplitude responses of the electrical equipment (measured or factory calibrated). The only unknown is the the channel h(t).

Figure 2 is an overview how h(t) can be estimated and the experiment can be conducted:

Figure 2: Flowchart showing procedure to obtain the impulse response h(t) in the forward problem to estimate the unknown source in the inverse problem.

In practice, the IR is obtained by linear (overlap and add method) deconvolution. We want to have a long excitation signal to ensure transducers have sufficient excitation time at lower frequencies (delayed low-frequency components). However, since we want to play the excitation signal multiple times to deconcolve multiple realizations of the IR, we need to make sure that the playback period of the excitation signals is longer than the IR. If the period is shorter, than the tail of the previous IR is still decaying while we play the next signal. We therefore need a way to approximate the lenght of the IR s.t. we can design an appropriate pause between realizations.

, which is the time corresponding to a decay of 60 dB) is given by:

where c denotes soundspeed (1500 m/s for the freshwater pool here), V denotes the volume of the pool (in

is the absorption coefficient of each surface area

) represents the combined area of all underwater walls and water/air boundary of the rectangular enclosure. The absorption coefficient for each boundary can be estimated using

represents the acoustic impedance of water and

the acoustic impedance of the boundary. Standard values for z are 415

can subsequently be used to design an excitation signal (e.g. a logarithmic sweep) s(t) that is approximately 5 times longer (Fig. 2(b)) to increase SNR. In addition, no preliminary experiment is required to estimate the RT. The frequency range of the excitation signal should exceed the frequency range of interest to minimize transducer transients and its maximum sampling rate is given by the minimum sampling rate of either the playback or recording system. The mean of s(t) should be removed (eliminates uncorrelated noise).

The next step is to conduct the experiment (Fig. 2(c)) using a channel length of 1 m such that results correspond to SSL. If possible, noise sources such as pool pumps and water overflow mechanics should be eliminated. I recommend to record 100 successive realizations of the excitation signal each separated by a time sufficiently longer than

to allow energy to decay between recordings. In addition, recording a control signal is recommended (a word of caution: it is very easy to be off by a constant when computing the transfer function). Once all excitation and control signals are recorded, the unknown source can be recorded in the same channel.

The IR h(t) can now be deconvolved (Fig. 2(e)) by correlating the recorded response (Fig. 2(d)) with the inverse of the excitation signal

The inverse filter f(t) needs to be appropriately designed to avoid a squaring of the magnitude spectrum. The intruded pure delay (conjugate multiplication with the inverse filter) can be easily ignored. This method ensures that h(t) is invariant to the amplitude of the input signal. Temporal inversion causes a phase inversion and the cross-correlation results in a pure delay of h(t). Hence h(t) has no amplitude or phase contributions due to the excitation method (and it reflects the IR of the system alone).

and is given by:

In practise, the IR is band-pass filtered at this step: while the lower bound is given by the Schroeder frequency, actual cutoff frequencies should correspond to the bandwidth of interest or might be dictated by the frequency response of the equipment.

Once the IR is filtered, its length needs to be estimated (Fig. 2(f)) which is accomplished using the either the measure of echo density or Schroeders method of backwards integration. Echo density is function of time and can be plotted concurringly with the IR to identify the transition time (

) between early reflections and late reverberation before the IR is truncated using a window (Fig. 1(g)). Schroders method can be used to estimate when the IR decays in the noise floor. While this method is more accurate and includes more energy of the IR, it seems that the energy within the late reverberant IR tail is insignificant.

Now we have obtained 100 realizations of h(t) which are properly filtered and windowed. All realizations can subsequently be averaged incoherently to obtain an estimate of

as given in the equation at the beginning of this tutorial. For a more in depth discussion, please read the paper.